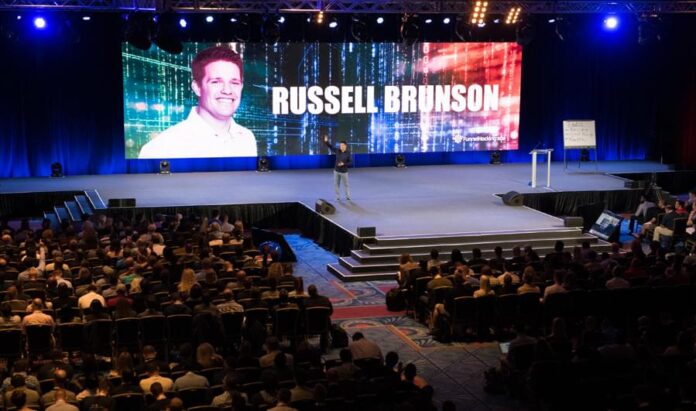 Russell Brunson Net Worth 2021: One of The Best Marketers Ever?!

If you are a digital marketer, the chances are high that you have heard about or even used ClickFunnels. This software is a wonderful tool that helps marketers create landing pages, sales funnels, and more. Russell Brunson is the brain behind this software. You must be curious about who he is, what he has done, his background, and other things. In this post, we will reveal all about him. You will find out Russell Brunson net worth and much more. Read on to find out who Russell Brunson is.

Who is the man, Russell Brunson?

As his work with ClickFunnels indicates, he is a digital marketer. He is an American Digital Marketing expert and the creator of many tools like ClickFunnels.

He was born and raised in Utah and spent a wonderful childhood in Salt Lake. While a child, he knew that he wasn’t cut like the rest. He spent most of his childhood as a collector of junk. Instead of the cartoons that his mates loved, Russell loved listening to and watching commercials on television and radio.

His curiosity grew with him, and as soon as he was old enough, he delved into the world he had only just watched from a distance. He became an entrepreneur and marketer, venturing into different businesses as soon as the opportunity came up.

His education in the local school saw him become part of the school wrestling team, where he distinguished himself through his victories and tenacity. His time in the wrestling team was a period of character development and learning. Some of the things he learned as a junior wrestler included competition, hard work, and a winning mentality – all of which he carried into his adult years.

He had as a mentor, the famous Dan Kennedy. Today, he is a mentor to both old and young digital marketers.

Start of his career

Getting to where he is today wasn’t an easy feat. He started selling potato gun DVDs over the internet. And this business saw him join the marketing industry and establish himself. Through his business, he made up to a million in sales before leaving college. As a result, this elevated him to be one of the thought leaders in his field.

After leaving college, he delved more into the business world. This time, instead of potato gun DVDs, he started to sell software coaching books, consultations, and similar services. He also became more established in the industry when he captured over a million leads. He received several awards – just from his first year in the industry.

His most famous creation, ClickFunnels, was inspired by the problems he faced while creating sales funnels. Ordinarily, making a sales funnel could take months or over a year. He sought to shorten the time while making something that would still result in high conversions.

After plenty of thinking and trials, he finally made this wonderful software with the aid of Todd Dickerson. Together, they made this SaaS and have never looked back.

The ClickFunnels software as a service is one of the biggest of its kind in the whole world. Since its creation, it has gone to make millions of dollars, and the company is listed as a multi-million dollar company today. It continues to grow as the years roll on and today has served more than 50,000 customers worldwide.

The company is full of like-minded individuals with their strengths and capabilities. He has surrounded himself with leaders in respective fields, including tech gurus, designers, marketers, and more.

He has made the ClickFunnels mentioned above, several ebooks, and runs a mastermind program. Apart from his current ventures, you also have to keep in mind that he had other ventures before moving into the digital marketing space.

From research and estimates, Russell Brunson net worth is about $40 million. That is the latest estimate. However, as the company continues to expand into other regions, it is estimated to rise even more. Apart from ClickFunnels, there are several other ventures in the pipeline, which we believe will make him worth even more.

He has made several products, including the famous ClickFunnels. He is also the author of several best-sellers like DotCom Secrets and Expert Secrets. Let’s see what these software, books, and programs do.

This is unarguably his greatest work to date. ClickFunnels is a software as a service that helps budding and established digital marketers to create a sales funnel. Subscribers to the software are obliged to pay a monthly fee ranging from $97 to $297, depending on the package.

An impressive fact about this company is that he received no external funding for starting it. Hence, he owns a large share of the company, if not all, of it. While the company is currently worth over $360 million today, you cannot assume that he is worth up to that. The company is private, and the amount is not even definitive.

With tens of thousands of monthly subscribers, ClickFunnels generates millions of dollars annually. Thus, the company generates up to $30 million every year from subscribers.

Removing the cost of operation, which runs to over 60% for a software as a service company, you will have around $10 million as the profit generated. Since Russell largely owns the company, it is only logical to assume that he takes home more than half of that amount every year.

Apart from the software as a service, Russell Brunson has also authored several useful books for digital marketers. These books are made to help online business people. 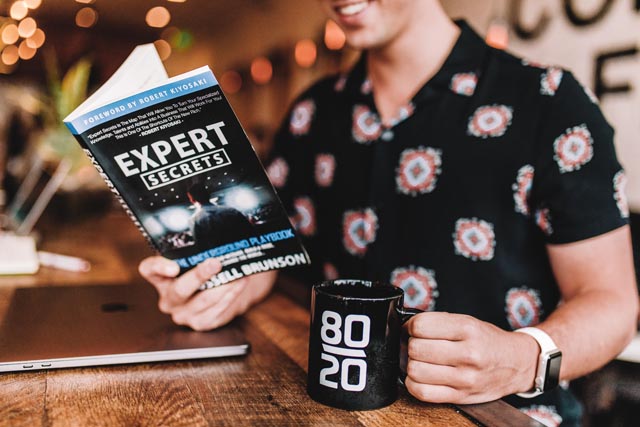 He is the author of 108 Proven Split Test Winners, a book that is designed to help folks adjust their website to optimize sales. There is also the Funnel Hackers Cookbook that serves as a guide to anyone interested in creating funnels. The book shows the different types of funnels available and how to build them.

His latest books are DotCom Secrets, Expert Secrets, and Traffic Secrets, which form a trilogy of sorts.

All the books he has written have been fairly successful and have generated more than $750000. Since they are still useful today, these books continue to sell out and contribute to Russell Brunson net worth.

These books appear to be self-published. Thus, he doesn’t pay anything to a publishing company. He receives up to 70% royalty fee from every copy sold. From the website, we see that he has sold around 100,000 copies of these books – individually. Thus, going at an average of $4.99 per copy, he has made up to $700,000 from his books. 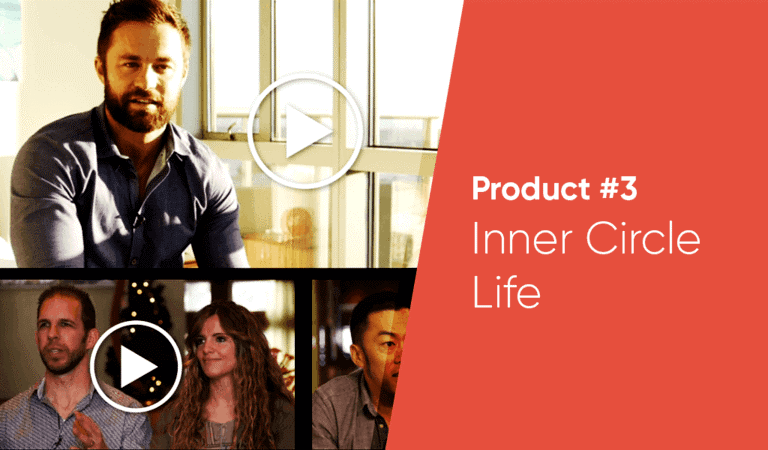 The Mastermind Program is an excellent source of revenue for him. This program, named Inner Circle Life is an exclusive program that accepted only 100 people who paid $25,000 a year. Why so high? Well, this program allowed participants to be directly coached by Russell.

He has done this program for three years now. Considering how expensive it is, it isn’t surprising that this is another source of increasing Russell Brunson net worth.

As the Mastermind Program, books, and ClickFunnels continue to be used by more people, his $40 million net worth is expected to grow.

Other Sources of Income

Before his big break and becoming an author, he had plenty of ventures that fetched him some money. As we said earlier in the review, he first started marketing by selling how-to-make potato gun DVDs. As the sales are not very clear at this time, it is widely assumed that it was a successful venture. After these DVDs, he still sold some other things over the internet. He claims that he made his first million from such ventures. 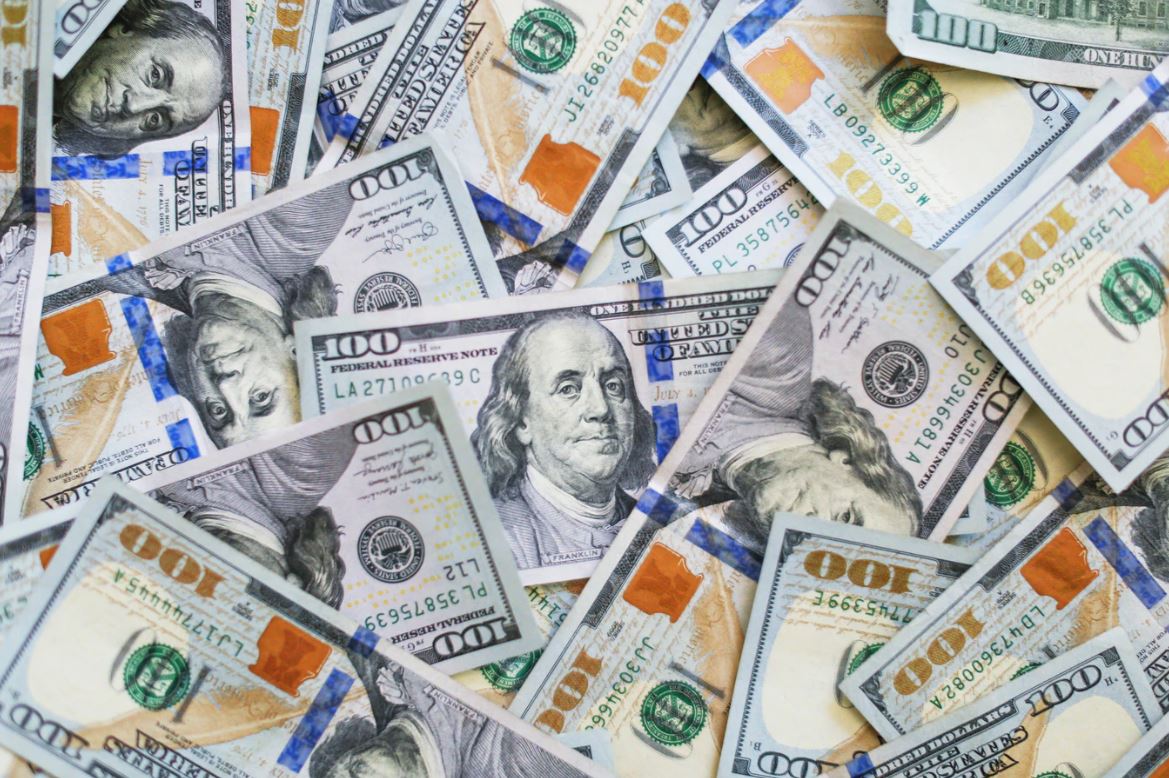 After selling those DVDs, he also migrated into selling other stuff. These include books, coupons, T-shirts, and more. During this period, he worked for a network marketing company. He was so successful here that he got a luxury car as a reward for his success.

With all these in mind, we can say that he already had plenty of money before making ClickFunnels.

From everything we have discussed so far, here is a summation of his net worth:

From previous businesses he has engaged in, he has made at least up to $2 million. From his books like Expert Secrets and DotCom Secrets , he has made at least $750,000. His Mastermind program, which he does yearly, yields at least $4 million. And the most famous program from him, ClickFunnels, makes around $20 – $40 million as a company.

Summing it all together gives a net worth of around $40 million.

In this post, we have revealed much about Russell Brunson. We have seen where he started from and the things that shaped him to become one of the most successful digital marketers today. What is Russell Brunson’s net worth? We have broken it down for you to have a general idea of just how much he is worth. With a net worth of around $40 million, which is likely to grow even higher as the years go by, he is one of the most remarkable Internet marketing gurus alive.

Before migrating from MailChimp, we took out a ConvertKit free trial to test the waters. We haven’t looked back since. In this 2020 ConvertKit...
Read more
Funnels

Selling goods online is similar yet so different from selling at a physical store. If you have never sold anything online, you might find...
Read more
Funnels

As a digital marketer, creating content and copy that sells can vastly enhance your sales. Words are powerful, and that translates into business. No...
Read more
Instagram Marketing

How To Make Money On Instagram: Amazing Monetization Strategies In 2021

Since Instagram's launch in 2010 the social media platform has taken the world by storm. Today, over 1 billion people use Instagram every month...
Read more
Instagram Marketing

How To Create Viral Instagram Posts With Ease In 2021

Creating viral Instagram posts is one of the cornerstones of being successful on Instagram. If you want to grow organically on Instagram, you need...
Read more

As a digital marketer, creating content and copy that sells can vastly enhance your sales. Words are powerful, and that translates into business. No...
Read more
Funnels

Leadpages Review: Is The Tool Still Great In 2021?

If you are looking for a simple way to build landing pages without writing a single line of code, you might be interested in...
Read more
Funnels

ClickFunnels Pricing: Is It Still A Great Deal In 2021!?

After considering the several tools at their disposal for improving sales, many digital marketers wonder if one of the most popular options, ClickFunnels, is...
Read more
Funnels

In this post, I'll be sharing my Traffic Secrets Review with you and discussing the importance of traffic as it pertains to your online...
Read more
SocialSummitAgency

We offer a fun and fast way to unleash the online marketing genius within you. Whether you're struggling to drive more traffic, convert your traffic, or stay in touch with your customers: We're here to help with detailed articles & programs!

Before migrating from MailChimp, we took out a ConvertKit free trial to test the waters. We haven’t looked back since. In this 2020 ConvertKit...
Read more
Email Marketing

GetResponse vs MailChimp: A 2021 Comparison of the Oldest Email Service Providers

News of MailChimp’s pricing changes caught many people by surprise. Not because MailChimp is not a good email service provider, but because other emailing...
Read more
Email Marketing

ActiveCampaign vs MailChimp: Who Sends Better Emails in 2021?

ActiveCampaign vs MailChimp? Which one do you pick? On one side, you have MailChimp- popular, easy to be with, and all-around fun tool, and on the...
Read more